HOTEL NACIONAL DE CUBA IS A NATIONAL MONUMENT AND HOLDS THE STATUS OF NATIONAL MEMORY BY THE UNESCO.

COME TO CELEBRATE LOVE WITH US.
Enjoy this very exclusive package we have prepared for couples to experience romantic and unforgettable moments together at Havana’s most famous hotel and also enjoy great savings by booking directly online.

THE MAGIC OF CABARET PARISIEN

Enjoy the unforgettable show “Habana de Fiesta” at the famous Parisien Cabaret, with lots of music, dance, atmosphere and colors. A very fun way to learn more about Cuba’s history, culture and its people through music.
Hours: 9:00 p.m. – 2:00 a.m. (every day, except Wednesday)

Awarded for the 18th time as: Cuba’s leading hotel

Located in the center of the Vedado neighborhood, in Havana, housed in an imposing eclectic architecture of the 30s with a view of the esplanade of the Malecón, the legendary Hotel Nacional de Cuba is considered a symbol of history, culture and Cuban identity. It was declared a National Monument and awarded d the status of Memory of the World at the National level granted by the United Nations Organization for Education, Science and Culture (UNESCO).

At the garden of the hotel, you still can see two of the Santa Clara Battery cannons that belonged to the Havana Defense System at the end of the Spanish colonial period, and are now included, together with Old Havana, in the list of UNESCO World Heritage sites.

In its 92 years, the majestic Hotel Nacional de Cuba has witnessed some of the most important events in the history of Cuba that link the republican and revolutionary stages, and it also has a long list of famous guests, including Gary Cooper, Johnny Weissmuller, Buster Keaton, Erroll Flynn, the Dukes of Windsor and José Raúl Capablanca in the 1930s, Fred Astaire, Rita Hayworth, Winston Churchill, as well as Italian-American mafia bosses and Mexican movie stars like Maria Felix , Jorge Negrete and Agustín Lara in the 1940s, and Marlon Brando, Frank Sinatra, Ava Gardner, Nat King Cole and Walt Disney in the 1950s, Yuri Gagarin, Gabriel García Marquez, Jean-Paul Sartre and his wife, Fidel Castro and Ernesto “Che” Guevara in the 1960s.

From 1979 to the present, it has been the venue for the International Latin American Film Festival, becoming the meeting place for contemporary actors and filmmakers such as Robert de Niro, Robert Redford, Francis Ford Coppola, Danny Glover, Steven Spielberg, Imanol Arias, Geraldine Chaplin, Kevin Costner, and Gloria Pires.

Hundreds of celebrities and among them more than 100 heads of state have been hotel guests, their photographs, as well as historical objects are displayed in the Hall of Fame, a must-see site when in the Cuban capital.

Learn more about the history of this unique jewel of the Cuban hotel industry by joining one of our free guided historical tours from Monday to Saturday at 10 AM.

Whether you are in the mood for a gourmet dinner, a colorful cocktail, or trying Cuban creole food, we have options for you at Hotel Nacional de Cuba.

At Hotel Nacional de Cuba we offer several choices of restaurants and bars with a full range of dining options and cocktails. From our very popular and convenient buffet to more specialized menus for lunch and dinner with international and local themes.

Our bars are conveniently located throughout the hotel, so you can enjoy one of our memorable mojitos when you are relaxing by the pool or closing a business deal at our Executive Floor.

Our famous terrace, with arguably the best views of the malecón, is the most seek after spot to have a coffee or a sip of a Cuban ron añejo any time of the day, but it is specially during sunset that you might realize why our legendary Hotel is the best choice for accommodation in Havana.

ENJOY THE EXTRA BENEFITS OF OUR EXECUTIVE FLOOR

When staying at any of our rooms at the Executive Floor our guests will enjoy some exclusive perks and valued added benefits, such as:

In addition to the above, guests staying at our Special Senior Suite rooms, Presidential Suite, and Royal Suite, will also enjoy:

24×7 expedited and private check-in/out, courtesy massages and sauna access during their entire stay, a courtesy Habanos tasting and paring with Cuban coffee or rum (“Ritual Sabor a Cuba”), and a free corporate gift.

*Subject to availability
**Prior reservation is required 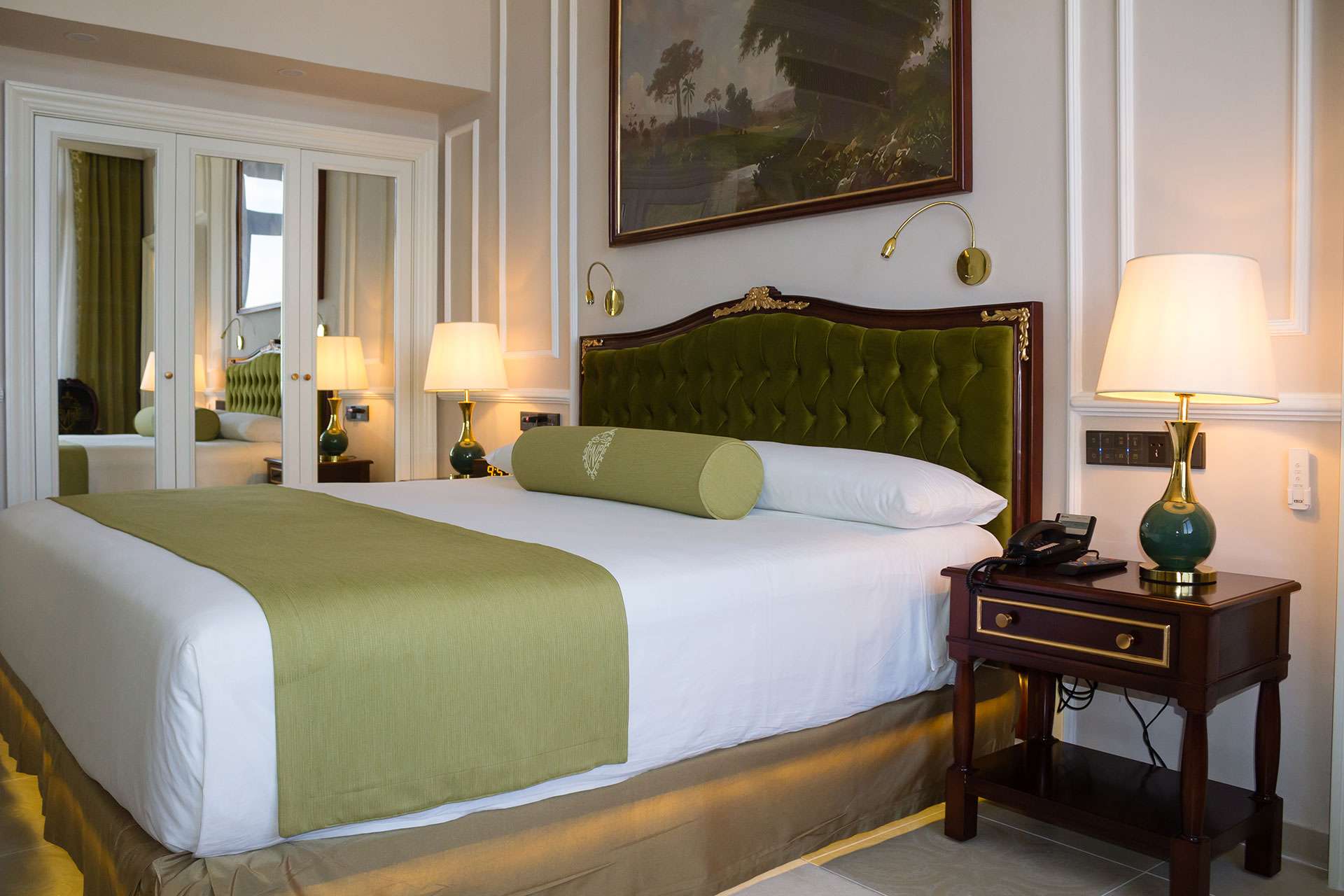 The hotel has 426 Standard Rooms, 30 Junior Suites, 12 Senior Suites, 2 Special Suites, 1 Presidential Suite, and 1 Royal Suite. Most of our rooms have been recently renovated, and conveniently furnished and equipped for maximum comfort.

We are celebrating our 22nd year online